This article is a stub. You can help Granblue Fantasy Wiki by expanding it.

Gran is the male protagonist of Granblue Fantasy. His female counterpart is Djeeta. Looking for his missing father, he embarks on a journey to Estalucia with Lyria, her guardian Katalina and his childhood companion Vyrn.

Gran is the male player character in the game. He is the captain of the crew that travels aboard the Grandcypher.

Gran lived in Zinkenstill, an island of the Phantagrande Skydom. One day, he found a letter from his missing father instructing him to fly across the skies to Estalucia, Island of the Astrals. Shortly after, he met Lyria and Katalina who were both fleeing from the Erste Empire. He died after fighting against a Hydra commanded by Pommern whilst trying to defend the two.

Once Lyria linked both of their souls together to save his life, Gran decided to leave Zinkenstill to journey alongside Vyrn, Lyria, and Katalina to reach the end of the skies. 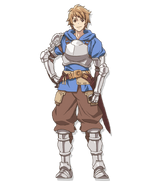 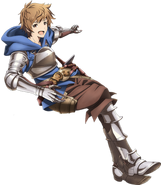 Add a photo to this gallery
Retrieved from "https://granblue.fandom.com/wiki/Gran?oldid=30065"
Community content is available under CC-BY-SA unless otherwise noted.