This article is about the story version of Lyria. For her SR verion, see Lyria (Event).

Lyria is the heroine of Granblue Fantasy. After running away from the Erste Empire, she was rescued by Gran/Djeeta and later joined them as part of their skyfaring crew.

Lyria is a mysterious girl with the ability to command primal beasts. She was a prisoner of the Erste Empire, who was using her for their mysterious research, but she managed to escape thanks to Katalina, who was assigned as her guardian. After Gran/Djeeta was seriously injured protecting her on Zinkenstill, Lyria linked her own life with theirs, forming a connection between their souls. She has the ability to absorb the power of primal beasts and then summon them in battle, as well as communicate with them telepathically. The origins of her powers are completely unknown. In the past, Lyria was a lethargic girl who very rarely showed emotion (much like Orchis) but after spending time talking with Katalina, she became much more outgoing and expressive.

Lyria first became a playable character in the 3rd-anniversary event "What Makes the Sky Blue?"

When in a player's party, her element changes according to that of the player character. Instead of doing regular attacks, Lyria uses her skills to buff her allies and build up her Charge Attack, as well as allowing the player to perform summons. It's important to note that if Lyria is in your party and in the back row, you will not be able to summon as you normally would, even if Gran/Djeeta hasn't been knocked out.

This preternaturally powerful girl could alter the fate of the sky. She can both command primal beasts, and merge her life force with yours. Lyria has no memories from before the Erste Empire took her. 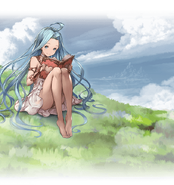 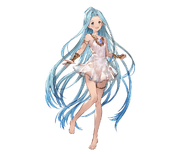 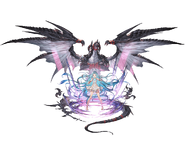 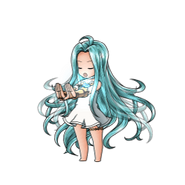 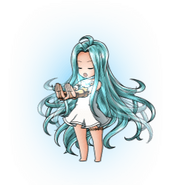 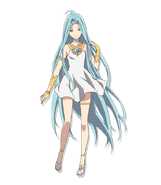 Add a photo to this gallery
Retrieved from "https://granblue.fandom.com/wiki/Lyria?oldid=30267"
Community content is available under CC-BY-SA unless otherwise noted.