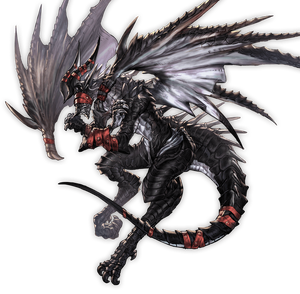 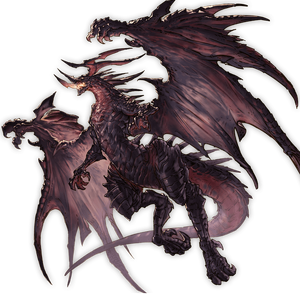 In response to an earnest plea, the dragon breaks its shackles. Its cry resonates across the sky, and strikes awe into the hearts of all who hear it.

Proto Bahamut is one of two Rank 80 raids. It is summoned from the northern Zinkenstill area, Azure Sky Sanctum. This raid is a primary source of

Star Sand Scoop at the shop. You might also need to complete the Omega showdowns of Luminiera and Celeste to trigger it's appearance.

Unlike other raids, the first time completion reward for Proto Bahamut is a

Horn of Bahamut instead of

Ragnarok Field
Minor damage to all allies and inflicts

Ragnarok Field, which deals damage each turn in inverse-proportion to the number of players in the raid. With 30 people in the raid, it deals 50 damage per turn.
Used as a first action (in phase 1) and potential phase 1 Charge Attack.

Abdak Force
2000 damage to all allies, massive Resistance Up against a random element, and

Double Attack UP.
Used as a phase 2 Charge Attack.

Retrieved from "https://granblue.fandom.com/wiki/Proto_Bahamut?oldid=27341"
Community content is available under CC-BY-SA unless otherwise noted.