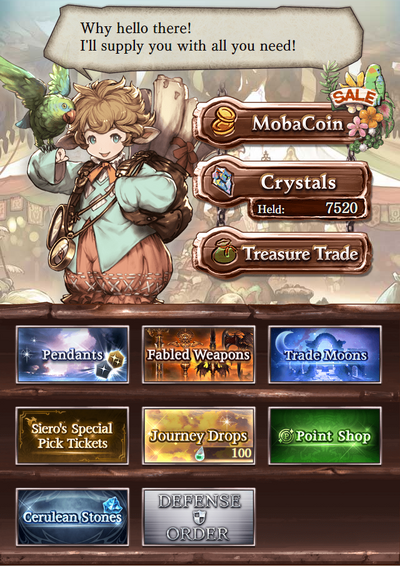 This shop sells items and upgrades for Crystals, the premium currency in Granblue Fantasy.

This shop allows trading in items found during Main Quests. It includes the Cosmic weapon series as well as coop room boost items.

Trade in daily dungeon materials here. Generally, many lower-tier items can be traded for one higher-tier item, or vice versa, though some key links are missing. There is a daily limit on how many of each item can be exchanged.

For all elemental items, same elements are used to exchange for one another.

Certain items found from Coop Quests can be sold for rupies here.

Note that Searing Stone, Resplendent Coral, Opulent Amber, and Vortical Pinwheel, are used in crafting Class Champion Weapons to unlock Row IV classes, so it may not be prudent to sell them for rupies.

This shop sells items for Renown Pendants and Prestige Pendants. Pendants are obtained from raid bosses with the matching symbol over it.

This is where high-end weapons are crafted.

Trade moons here for various items. Moons are obtained whenever you Draw a character that you already have; Rares give Bronze Moons, S Rares give Silver Moons, and SS Rares give Gold Moons.

This is where special pick tickets are redeemed. These are similar to Start Dash tickets and Surprise Tickets. This section also doubles as a list of most characters, weapons, and summons currently available from Draw. Clicking on the portraits will bring up details on stats and skills.

Every day at 05:00 JST, when the day resets, players are awarded 1 Journey Drop for every 100 AP spent during the previous 24 hours. Journey Drops can be spent here for various 1-hour buffs. As more Journey Drops are earned in a month, stronger buffs become available the next month and more buffs can be active at once (two at silver, three at gold or platinum)

Arcarum: The World Beyond Edit

Choose the major arcana representing the oracle you chose for Arcarum to upgrade your Arcarum card. There are 3 known levels of upgrade thus far. The known arcana elements are:

Retrieved from "https://granblue.fandom.com/wiki/Shop?oldid=24328"
Community content is available under CC-BY-SA unless otherwise noted.