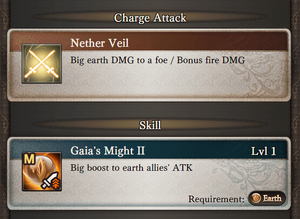 Weapon Skills are modifiers found on Rare and higher weapons. These skills give stat bonuses to certain types of characters, or provide other bonuses based on the skill.

There are some skills that require the weapon to be a certain level. This naturally also requires the weapon to be uncapped enough for you to reach that level. Refer to individual weapon pages to determine if that weapon has such a skill.

Each party uses 1 main weapon and up to 9 sub weapons. This is colloquially referred to as the "weapon grid." The main weapon dictates the element and charge attack of your main character, but weapon skills on all weapons in your grid are always active (apart from a few exceptions specifically stating so) and will strengthen all applicable characters in your party.

Raising weapon skill levels requires sacrificing other weapons with skills or Fury Pebbles/Fury Stones as upgrade fodder. When upgrading a weapon with another weapon with a skill and/or Fury items, the upgrade summary will state "Skill Level Rise Rate: X%." This is the chance your weapon will gain a skill level if you perform this upgrade. Depending on the weapon rarity and current skill level, different amounts of upgrade fodder is needed to reach a 100% chance.

To make calculations easier, the Granblue Fantasy community has assigned point values to common upgrade fodder and created a table of skill levels with the number of points needed to reach a 100% chance of upgrading a weapon's skill. Note that 100% is the highest rate you can get; using more points than necessary will not allow you to get more than 1 skill up per upgrade.

, you can imagine how to make the Bahamut Weapon skill up process less painful. However, depending on how many fodder 03

weapons you have available, certain combinations can be even more efficient than simply skilling up one SSR.

So what we discover here is that, even though 03

sk5 is still very efficient (generates 200 points but only requires 120 to create), it is actually more efficient to use multiple SSRs to add up to a skill of 5 instead. However, this method relies on having access to many extra SSRs, so this information may or may not be useful to every player.

There are 3 weapon skill types:

The three skill types modify their own multipliers and can be boosted by certain summons:

Skills that only appear on special weapons.

Cosmos weapons have two skills, depending on their weapon type and class type.

Retrieved from "https://granblue.fandom.com/wiki/Weapon_Skills?oldid=25637"
Community content is available under CC-BY-SA unless otherwise noted.