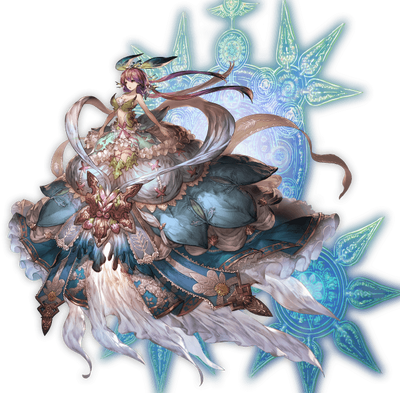 Yggdrasil is one of the Primal Beasts of the main islands. She is first encountered in Lumacie Archipelago (ルーマシー群島) and has four versions: Normal, Hard, Extreme (Omega/Magna) and High Level. Every Yggdrasil quest outside of the story is a raid battle.

Yggdrasil Omega is summoned from Zinkenstill (ザンクティンゼル), the first island, from the bottom-center area. As with all Omegas, rank 30 is required to host or join a Yggdrasil Omega raid.

Yggdrasil Omega's basic attacks are unique in that they are low damage (~650 damage, reduced to ~250 with 50% Attack DOWN and Wind units) but numerous, striking between 4 and 8 times a turn. This usually results in damage being spread evenly. The real threat is in her Charge Attacks: Nether Mantle's Fire damage counteracts any Earth resist, and Axis Mundi inflicts a pair of dangerous status effects. Luminox must be avoided at all costs, as it inflicts so much damage that only a MLB Zircon Carbuncle or Gawain will save you. The good news is that Yggdrasil Omega can be rushed to Break status very fast with a good enough Wind pool, allowing you to either secure MVP or take a non-OD Charge Attack instead of Luminox. Other than that, Yggdrasil is one of the simpler Omegas to defeat as she has no triggers or enrage.

Retrieved from "https://granblue.fandom.com/wiki/Yggdrasil?oldid=27387"
Community content is available under CC-BY-SA unless otherwise noted.